Where Are They Now? Trey Hillard

Trey Hillard was a Blue Ridge student not too long ago in the graduating class of 2015, and now he is a proud member of the armed forces.

During high school, Hillard competed in Varsity Baseball as a 4-year starter. He also played golf and football, but wanted to focus more seriously on his baseball career. Hillard decided to play baseball year-round. School ball in the spring, travel-ball with the Moosic Mets in the summer and fall, and finally baseball workouts and bullpens in the winter.

Besides a constant life of baseball Hillard also was in the National Honor Society, and maintained a high academic standard, enrolling in all the AP classes he could.

Hillard received a congressional nomination from Tom Marino to go to the Naval Academy but instead decided he was going to attend University of the Sciences in Philadelphia.

Hillard chose to major in microbiology and play baseball for the division two program. After a solid rookie season, Hillard suffered three concussions his sophomore year and decided it was time to give up the baseballs and cleats. The one thing he loved to do he would not do again.

During college his roommate was on a full R.O.T.C. scholarship. R.O.T.C. stands for Reserve Officers’ Training Corps, which is a college program offered at over 1,700 colleges and universities across the United States that prepares young adults to become officers in the United States military. In exchange for a paid college education and a guaranteed post-college career, cadets commit to serving in the military after graduation. One day Hillard accompanied his roommate to R.O.T.C.  That was the day everything would change.

Hillard fell in love with R.O.T.C. and decided to join. Before his senior year of college, he completed his advanced training at Fort Knox, Kentucky and was accepted at the aviation school where he will train to become a helicopter pilot. 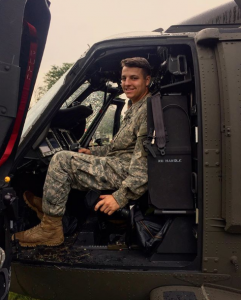 When asked what advice he has for others who are interested in following his path, he said, “R.O.T.C. is a great program, especially if you can get a full scholarship out of high school. As long as you don’t get into trouble and you keep good grades, you will save thousands of dollars on your education costs.”

HOW WONDERFUL & PROUD!! GOD BLESS YOU BOTH ALWAYS!

Great job Tyler!! You guys do a great job for the Raider Reader