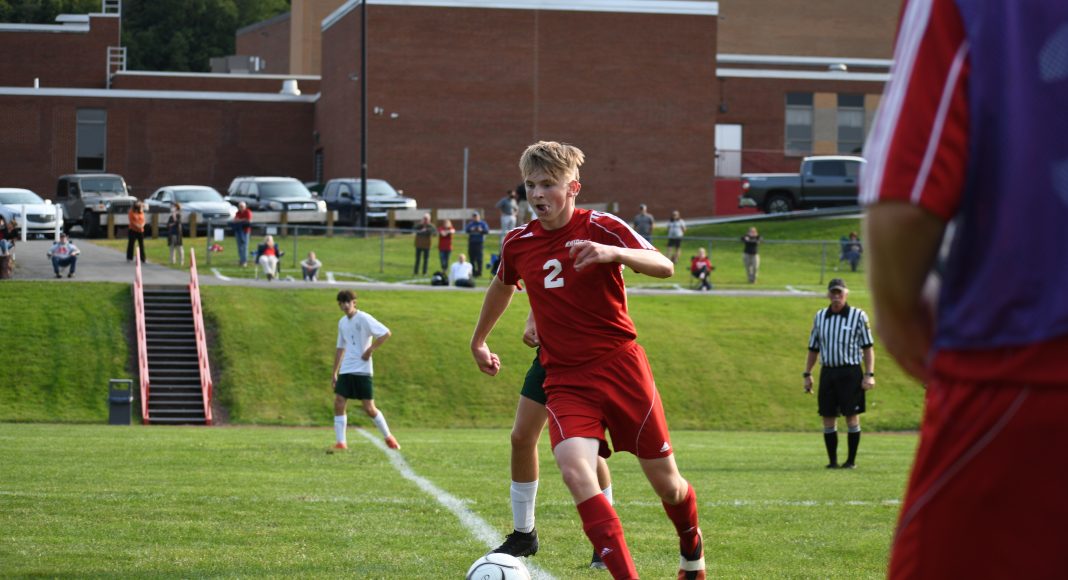 The 2020 soccer season is only three games deep but, real deep in stress. The team has been putting in hours and grinding away since early June.

The week before the first game (Away at Elk Lake) they were put in the newspaper as “The Team to Beat”. When game day rolled around the Varsity Soccer team failed to secure the win (1-0).

Although it would be easy to feel pessimistic after such a let down, the team stayed on the path of optimism and went right back to practice to grow and improve. With the COVID pandemic, the teams must play each other twice in a week. Due to this setup the Raiders would be going for revenge only 2 days later at Home. Finally, after two vigorous nights of practice and coaching adjustments, the second game rolled around. Elk Lake came out fast and aggressive scoring the first goal of the game. Blue Ridge however responded quickly scoring one of their own. (Goal scored by Junior Gerald Welsted)

After 40 more minutes, of playing Elk Lake was able to score again and leave the field with another victory.

The Raiders, “The Team to Beat” were left 0-2 giving them a very difficult rest of the season.

On 9/21 the Raiders traveled to West Scranton where they won 2-1. (Goals scored by Freshman Aiden Glasgow) The team currently 1-2 must win out the rest of the season if they hope to make it to districts and possibly a title. The next game is set to be at Home on Friday, September 25th where they will defend against West Scranton once again. Hopeful or bleak..? One thing is for sure, the Raiders will have to play every game like it’s their last if they desire that title.

Make sure you come out to upcoming Soccer games, and support the team for the rest of there season!

By:Reese Allen/Content Editor and Junior Writer "Don't let people tell you how to live or...

By: Ryan Higgins/Senior Writer "People look back at the past, wishing things could've gone better....

By: Brooke Upright/Senior Writer “Keep your soul clean and your boots dirty.” -Unknown As Isaac Arzola...

By: Rayne Glover/ Junior Writer and Social Media Director "Every accomplishment starts with the decision...

By: Reese Allen/Junior Writer and Content Editor Due to Covid-19, this year has been quite...
Error decoding the Instagram API json