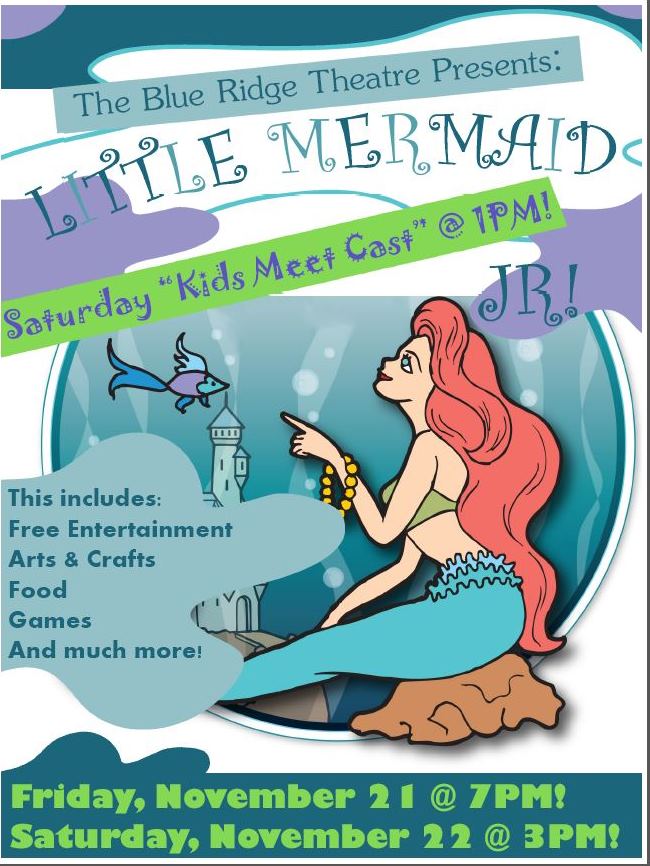 This past Saturday, the Blue Ridge Middle School ran their second (and second-to-last) showing of “The Little Mermaid, Jr.” With catchy songs, engaging choreography, and a fantastic cast and crew, the show was a hit with an entire auditorium of appreciative patrons, including myself.

The show opened with a band of enthusiastic seafarers who regaled the audience with a tale of the “fathoms below” and were quickly enchanted by the mysterious and beautiful voice of the little mermaid herself.  From there, it snowballed, no time wasted as the crowd was plunged into the sea, deep, deep down, all the way to Atlantis to share in the story of the youngest daughter of King Triton.  With every scene flowing into the next and the characters swiftly endearing themselves to their spectators, Ariel’s adventures in finding love and saving the sea unfolded in grand and thoroughly entertaining fashion.

The cast went above and beyond with this show.  Prince Eric and Ariel had great chemistry, their lines and actions working together to recreate the relationship from the beloved Disney tale with seemingly no effort.  Ursula, as well as her henchmen Flotsam and Jetsam, were delightfully sinister, with the perfect balance of fun humor and cunning villainy in their roles.  Ariel’s friends were played to perfection–the neurotic Sebastian, the loyal Flounder, and the ditzy Scuttle among them–all of them having been brought to life by a group of truly fantastic actors and actresses with a love for the spotlight.  Even minor characters left their marks, gracing the stage with tons of fun, amusing dialogue, and songs that wormed their way into people’s brains and had the audience dancing along in their seats the whole way.

The crew arguably played an even bigger part in this production, setting up everything to painstaking perfection for the best show possible.  The backdrops and props really made it feel like an underwater environment, from majestic paintings of the royal family’s palace to long, shimmering strips of blue fabric used to mimic waves.  The costumes, too, were gorgeous; a big thank-you to Mrs. Parsons, who truly outdid herself this time, garbing the cast in elaborate sea creature get-ups and sparkling mermaid tails.  Saturday’s “Kids Meet Cast” was a huge success, with several entertainment stalls set up for both future audience members and characters to enjoy before the show began.  Fun games and activities and excellent food (at a great price!) combined to make the experience one that I know many won’t forget.

And as for the songs themselves–let’s just say I can still hear them in my head!

The biggest thank-you of all goes to Ms. Z, who saw this play through from beginning to end.  She exhausted herself hammering all the details down and making sure everyone was ready for when the time finally came, and in the end, it turned out to be for the best: her effort, along with the effort of the students under her wing, became one of the most lively and entertaining shows Blue Ridge has ever put on.  May the next production be just as successful–or even more so–than the last!

All credit for this article’s photos goes to Mr. Joe Strauch, who did the filming for the performance DVDs.  The album for “The Little Mermaid, Jr.” and many more pictures can be found on his Facebook page entitled Pa Lions.

From “The Little Mermaid, Jr.” program: