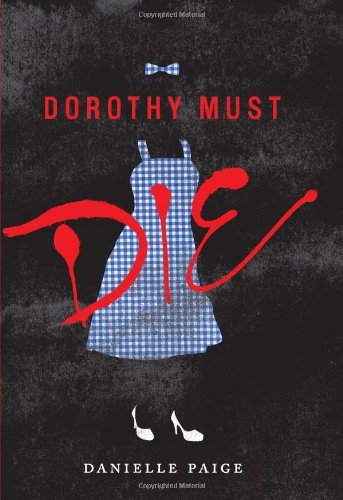 Dorie Penny
September 22, 2014
Share
Facebook
Twitter
Pinterest
WhatsApp
By: Nicole Swisher/Sophomore Writer
Everyone knows the story of Dorothy Gale.  An average farm girl from Kansas, her life is forever changed when a tornado picks up her house and deposits her in the magical land of Oz.  Immediately, she is swept up in a conflict of warring witches, ruby slippers, and yellow bricks underfoot, thus beginning her quest and forever engraving into memory the classic tale by Frank L. Baum: The Wizard of Oz.
Everyone knows how this story ends.  Dorothy melts the Wicked Witch of the West, finds the Wizard of Oz, witnesses as her friends are granted all they’ve ever wished for, and finally returns home with a simple click of her heels.  Set in stone are Dorothy and her memorable cohorts, all-loving heroes; set in stone are the Wicked Witch of the West and her flying monkeys, as vile as they come.  But… what if things weren’t quite that simple?  What if the story didn’t end there?
What if, one day, Dorothy returned to Oz… and became everything she once stood to defeat?
This is the premise of Dorothy Must Die.
Our hero is Amy Gumm, “the other girl from Kansas.”  Cynical after a lifetime of bullying and abandonment, Amy has little hope that she will ever escape the dusty, barren place she lives.  That is, until a tornado rips through her trailer park community and wrenches her home from the ground, and she wakes in an Oz very different from the one she remembers reading about.
Oz is no longer the magical, technicolor place it once was.  Oz is dying: still, gray, lifeless.  Many are dead; most have been sold into slavery or put in prison; those who remain free live out their days in fear.  And it’s all because of Dorothy Gale.  She came back and took over Oz, and now she rules with an iron fist and ruby slippered feet, aided by the counsel of her friends, who have become just as corrupt and immoral as she.
At first, Amy can hardly believe it, but an encounter with one of Dorothy’s latest victims changes her mind… and leads her to the Revolutionary Order of the Wicked.
The Order is an underground resistance of “Wicked” witches determined to make Oz a free land again.  They’ve been searching for the person who could do it, and Amy’s arrival seems almost too good to be true.  She is taught.  She is trained.  She is given a mission–and she intends to fulfill it.
The writing style of DMD is beautiful in its straightforwardness.  Through the deadpan eyes of Amy Gumm, the reader is immersed into the awful place Oz has transformed into–a place where Munchkins are forced to toil all hours of the day, where people can be strung up and beaten for such crimes as “Sass,” and where the line between Good and Wicked is nothing more than a blur.  Amy’s commentary is very effective at portraying the horror of the situation, and her sarcastic quips are wonderfully timed.  The beginning is a bit rough, with most sentences coming off as simplistic and choppy, but once the main plot kicks off this disappears and turns into a nice descriptive flow.
The characters are fairly well done.  Amy is a bit of a cliche–the tough, sarcastic girl who’s hardened herself to cope with a difficult life, and for some reason can’t seem to fathom that she might be in love–but her dialogue really fleshes her out and gives her more depth than she first appears to have.  Her main love interest, a wizard named Nox, is also somewhat cliched, being a dark, handsome, mysterious warrior who is “all about the cause.”  Again, however, his dialogue does him more justice than his first appearance, and their relationship is very engaging in the way it grows and takes shape amidst the secret war the Order wages.
On the other side of the spectrum, the minor characters are written fantastically.  The three main members of the Order–witches known as Mombi, Gert, and Glamora–absolutely glow whenever they grace the page.  Their motivations and true moral alignment are called into question several times, but no answers are ever given; and rather than being disappointing, this only enhances how complex they are, and just how deep their personal mysteries go.
The villains of this tale are something else entirely: Dorothy is not the innocent, naive farm girl we all remember.  She is nothing less than a monster, selfish and arrogant and extremely fake–yet isn’t it hard to imagine that little girl from the movie doing such terrible things?  Isn’t it hard to imagine the Scarecrow as a cruel scientist who gleefully experiments on live specimens?  Can you believe that the Tinman has become Oz’s primary executioner, and that the Cowardly Lion is now a fierce monster, a true King of Beasts?  Even Glinda, once one of Oz’s most beloved figures, has turned into exactly what she used to oppose: a Wicked witch.
The character dynamics of this novel are extremely interesting; I guarantee they will make you think, and maybe even reflect on your own morality.  What is Good and what is Wicked?  Or do such distinctions even exist?  Danielle Paige leaves that for the reader to decide.
My biggest gripe about this book concerns its marketing rather than its story.  The back-cover blurb is a bit misleading, as the events it mentions do not take place in this book but are instead foreshadowed to happen in the next one.  Going into the novel expecting one thing and receiving something completely different was somewhat disappointing.
Despite that, Dorothy Must Die is overall an amazing story that really works hard to make the reader think and care about its characters.  The pacing is flawless, the premise fascinating, and the journey into the depths of the ruined Oz will convince even the biggest Wizard of Oz fans of one thing:
Dorothy must die.

As of now, no sequel has been written.  However, a prequel novella available on ebooks, called No Place Like Oz, follows Dorothy’s return to the titular wonderland, her rise to power–and her fall from Good to Wicked.

Dorie Penny
I LOVE ARIZONA AND HOT POCKETS!- katee did this.