In the third inning, Jeff Zawiski’s hit-by-pitch set up Adam Roe’s Double to the warning track which easily scored Zawiski from first. Later in the inning, Kaleb Folk singled up the middle scoring in Roe from second to tack on another run for the Raiders to go up 2-0.

Later in the game the Raiders scored two more with hits from Josh Decker and Ben Gudykunst. Holy Cross decided to make a pitching change and put in their first-baseman Tommy Rohan. Coleman McCain laid down a sacrifice bunt to advance the runners and after a Zawiski hit-by-pitch, Roe delivered again by hitting an RBI fielders choice. Josh Goff then hit an RBI single to put the Raiders up 4-0 in the fourth inning.

All the momentum was on the Raiders side until the Crusaders rallied to score four runs to tie the game in the fifth inning. Holy Cross managed to rock four consecutive hits off of starting pitcher Ben Burchell. Josh Goff came in to relieve Burchell and managed to get out of the inning tied.

It was in the top of the seventh when the Raiders would be able to score the game-winning run. Ben Gudykunst led off with a bunt single down the third baseline. McCain then grounded-out which allowed Gudykunst to advance to second. Runner in scoring position none other than Adam Roe hit a singe just far enough over the shortstop to score the speedy Gudykunst.

Goff then secured the final three outs making the Blue Ridge Raiders District champs for the first time since 2015. The Raiders play their first state game versus South Williamsport June 3rd at Bowman Field at 4:00pm 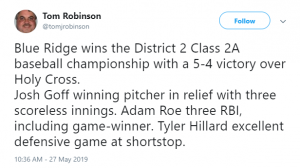