On April 28th Blue Ridge’s high school band took a trip to Philadelphia for an overnight stay, and a performance with the West Chester University Wind Ensemble.

The group left at noon on Saturday. They spent time at the hotel pool at The Courtyard by Marriott, before taking a trip to the King of Prussia mall for dinner.

The next day, the band traveled to West Chester University where they were able to listen to the University rehearse for the concert. Blue Ridge was then able to rehearse with the West Chester Ensemble in preparation to play side-by-side with them later that afternoon.

The concert opened at 3:00 pm with the Blue Ridge band playing Amazonas by F. Salutari, and Homage March from Sigurd Jorsalfar by Edvard Grieg (transcribed by Joseph Krienes).  Next, both bands performed side-by-side. Together they played Bock Fanfares by Jess Langston Turner. This was conducted by the West Chester Wind Ensemble’s conductor, Dr. Andrew Yozviak. The West Chester University Wind Ensemble then finished out the concert with Magnolia Star, Only Light, and Of War and Peace.

The concert was held at the Madeleine Wing Adler Theatre at the Performing Arts Center at West Chester University.

The performance was live-streamed (and can be found) on the Facebook page, Arts at West Chester University of PA. 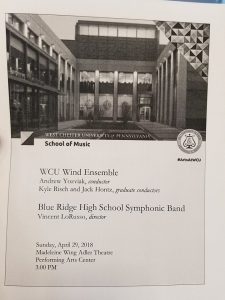