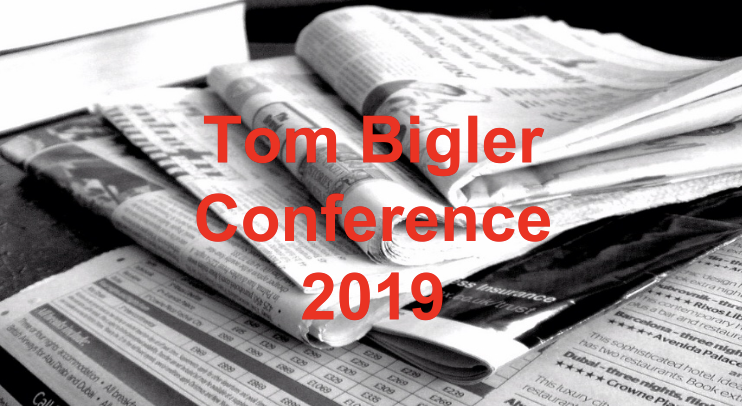 Once again, the Blue Ridge Raider Reader Staff, along with advisor, Mrs. Kimberly Davenport, will be attending the Tom Bigler Conference in hopes to learn more about mass media, radio broadcasting, communication, photography, public relations, production, and much more by attending workshops. Students will have the opportunity to meet with news reporters, broadcasters, newspaper workers, radio hosts, and many others from our local area to learn more about the journalism industry.

Peyton Gelinger, sophomore, is excited to attend her second Tom Bigler Conference, with this being her first year taking journalism. Gelinger explains that, “last year during my career advisement period with Mrs. Davenport, my class was able to attend the conference. While attending the conference I was able to learn more about what journalism was and realized that I wanted to join the Raider Reader staff and become more involved with journalism. Overall it was a great experience, and I learned a lot.”

The AP Government and Politics class also has the opportunity to attend the conference. Members of the class are attending the conference to see how the media works as a linkage institution in our government, as it ties into their unit five curriculum.

AP Government and Politics student, Katelyn Bowyer, is also attending the conference for her second time. She states, “I’m excited about what this year has to offer and I can’t wait to experience the Bigler Conference a second time around.”

Students were able to submit pieces into a journalism and media contest for the Conference. There are four categories of awards. They include; the Overall Award and Spotlight Award, which recognizes newspapers both online and printed along with broadcast programs, the Individual Merit Award which recognizes individual reporters, the Young Journalist of the Year Award, and the Adviser/School Award.

The conference is held in honor of a well known journalist in the Wyoming Valley’s journalism community, Tom Bigler. Bigler was very active when it came to his local community’s media outlets. He worked for a total of five radio stations including; WILK Radio, WILK-AM Radio, and radio stations in Hazelton, Newcastle, and Washington, Pa. He worked for three television stations including; WNEP-TV, WBRE-TV, and WILK-TV and for the newspaper The Times Leader. Bigler worked as a professor at Wilkes University teaching journalism and ethics, and was the faculty adviser to The Beacon.

Also while working at Wilkes, he started an annual high school journalism conference. To add to his long list of accomplishments in his occupational career, Bigler also served in World War II in the United States Air Force. These name a few of the more than twenty other community and professional based organizations Tom Bigler was involved in.

Tom Bigler certainly served as a model to his community through his love of journalism and community service. The annual Tom Bigler Conference is a great way to honor his memory and celebrate his love for journalism, and to share his passion to have his legacy continue to live on throughout the journalism community.

Sarah Marble
Sarah Marble is a senior and a second year journalism student. She enjoys spending her time giving back to others. She values being involved in her community and school as an active leader. After graduating high school, she will be attending Penn State College of Nursing to earn a Bachelor´s Degree in nursing to become a Registered Nurse to be a light for others.

By: Peyton Gelinger/Junior Writer  The Blue Ridge National Honor Society is having a “Pennies for Patients“ fundraiser. The fundraiser will benefit the Leukemia...
Read more
News in Brief

By: Tori Auckland/A&E Editor There is music in the air! Wednesday, January 15th, eleven chorus students took off to District Chorus! Almost all of the...
Read more
News in Brief

High School Art Making Its Way Into The Community